Desktop Konnekt 6 sounds really good. Music played by this interface has a lot of definition, clarity and detail.

Guitar inputs are of exceptional quality. Highs are cut so there's no hiss there, but it sounds a little bit like a Line 6 POD Studio interface. Preamps do their job well and sound fine. Compared to M-Audio Firewire 410, Desktop Konnekt seems to have more low end, less highs and slightly smaller dynamic range.

What's totally awesome is that this device has a power supply with a grounding pin. It saves you from ground loop problems if you're working on a computer with power supply that has no grounding, like a Mac mini or a notebook.

I didn't have an opportunity to check its microphone preamp yet.

Headphone output sounds nice and it can get very loud.

There's a 180 degree phase shift on all outputs of the Konnekt 6. In other words the phase is inverted. In theory this shouldn't make a difference as the sound is a wave and it doesn't matter to human ear if it's compression or decompression, because both are perceivable. IMHO it does sound a bit different especially on headphones, giving an impression of more saturated and fuller low end, and, what's worse, it also affects double and quad tracking guitars resulting in a certain weird quality in recorded material.

It seems at first that the Konnekt 6 has balanced analog outputs, but they are so called ground sensing balanced (electronically balanced) outs and their design doesn't allow inverting the phase. The third pin doesn't send inverted signal.

Support at TC Electronic has problems with understanding written language - detailed description of the case that included information on how to identify the problem was answered after weeks with a suggestion that I used faulty wiring, even though I used previously tested standard instrument cables and this was also mentioned. I tested two different Konnekt 6 units and other interfaces that use the same TC designed chip - Focusrite Saffire PRO 14 and Presonus Firestudio Mobile. Firstly I thought that it could be a software issue, but the same situation occurs with Direct Monitoring and no computer connected.

Measured round trip latency goes down to 6.96ms (307 samples @ 44.1kHz) at Core Audio buffer size of 14 samples and operation mode set to normal (lowest safety buffers setting). With the buffer set to 128 samples at the same operation mode, the latency raises to 12.13ms (535 samples). These are more than acceptable values, however there are interfaces out there that perform a bit better in this field. There's no latency drift - it's stable no matter what. Drivers are reliable and solid. Performance wise I encountered no dropouts even at the lowest latency with 12 tracks loaded with Overloud TH2 (preset - Big Stack 80) in Reaper. CPU usage reported by Reaper was around 66%.

Update - the latency is lower by 9 samples (0.204ms) on the headphone out. It seems that the main level knob is digital and the phones level knob is a simple analog potentiometer. This makes the lowest possible round trip latency go down to 6.757ms (298 samples @ 44.1kHz).

Safety buffers can be adjusted through TC Near Control Panel. You can choose between normal and safe modes 1, 2 and 3. Normal is the lowest setting that allows minimal round trip latency.

This is where this Konnekt really shines. On a desk it's more like a mixer with its meter, buttons and knobs located on its slightly angled top. It offers fantastic access to its functions and after only few days of using it I can't even think of going back to a classic interface with everything located on its side. What I exceptionally like about Desktop Konnekt 6 are that big volume knob with a backlight and output dim button. Switching to headphones couldn't be quicker. Instead of the usual direct monitor level control there's a smart input/daw balance knob. That's brilliant. High resolution meter can be used to monitor input and output (pre and post volume) levels. In addition there are signal/clip indicators located just by gain knobs. There's another knob for controlling reverb which can be mixed in for tracking.

Desktop Konnekt 6 is a well designed product. It's reliable, functional and it sounds great, too.

What I exceptionally like about Desktop Konnekt 6 are that big volume knob with a backlight and output dim button. As i first heard and played with it i thought omg yeah thats the color and qualitiy i wished to get from my software reverb and started the including “VST-M” Reverb wich sounded bad like -software and has nothing to do with the reverb “in” the konnekt. Preamps do their job well and sound fine. Recordig Direct- Guitar or Bass is ok because every Plugin makes the sound not better. As a company, we have one single objective: Tech Specs Monitor control.

So basically you need a box with inputs to plug your instruments in. The advantage of shooting with digital-capture cameras is the efficiency in the production process. Prices, specifications, and images are subject to change without notice. It is expressed in terms of watts, milliwatts or microwatts. Still, you need one to record your stuff.

The device offers tc electronic desktop konnekt 6 sound quality for the price with great quality D-A convertors that work at sample rates up to kHz. A digital system is a data technology that oknnekt discrete discontinuous values. Konbekt offers hall, plate and room algorithms. The large volume knob is something I already love.

Support at TC Electronic has problems with understanding written language – detailed description of the case that included information on how to identify the problem was answered after weeks with a suggestion that I used faulty wiring, even though I used previously tested standard instrument cables and this was also mentioned.

Sign up for our newsletter. Some microphones must be used in conjunction with a preamplifier to function properly.

For this its perfect! No Longer Available This item has either been discontinued by the manufacturer or is no longer available to purchase on our website. I always start making music by deskyop Addictive drumms in samplitude and then record my guitar ideas to it maybe bass or vocals etc. In Your Own Words Would just like to thank you for getting the goods to me before my daughter’s bday with standard tc electronic desktop konnekt 6 and excellent price.

So far the Desktop Konnekt 6 is the best small audio interface I have ever used. Shop Business Hours Directions.

It features dedicated monitoring features including a level meter, tracking reverb, monitor volume controller and headphone level. The volume knob glows with red light when you turn it up. The first one i bought inwas because of its Design and the price was tc electronic desktop konnekt 6 attractive. Available hc This item is in stock and can be dispatched immediately. A bus often takes the form of desitop wire or printed circuit conductor that terminate at multiple connectors which allows the devices to be plugged into the bus.

Refers to the built-in audio capabilities of the Mac OS X operating system. WxHxD x x mm, weight: In reference to digital audio and computers, the term means software that uses the processing power of the computer, and does not require additional dlectronic.

Of course, you might need a lot of inputs or outputs.

The timing uncertainty in digital audio systems is called “jitter. Always with customised added value for musicians. When this is combined with the “uninverted” noise, it cancels it out.

FireWire also known as i. If you want to electronlc some instruments at home or sing along with yourself, this device is for you. These are more than acceptable values, however there are interfaces out there that perform a bit better in tc electronic desktop konnekt 6 field.

When you need it. The original form of what Apple would later name the “Mac OS” was the integral and unnamed system software first introduced in with the original Macintosh, usually referred to simply as the System software. Phantom power supplies are often built into mixing desks, microphone preamplifiers and similar equipment. As a company, we have one single tc electronic desktop konnekt 6 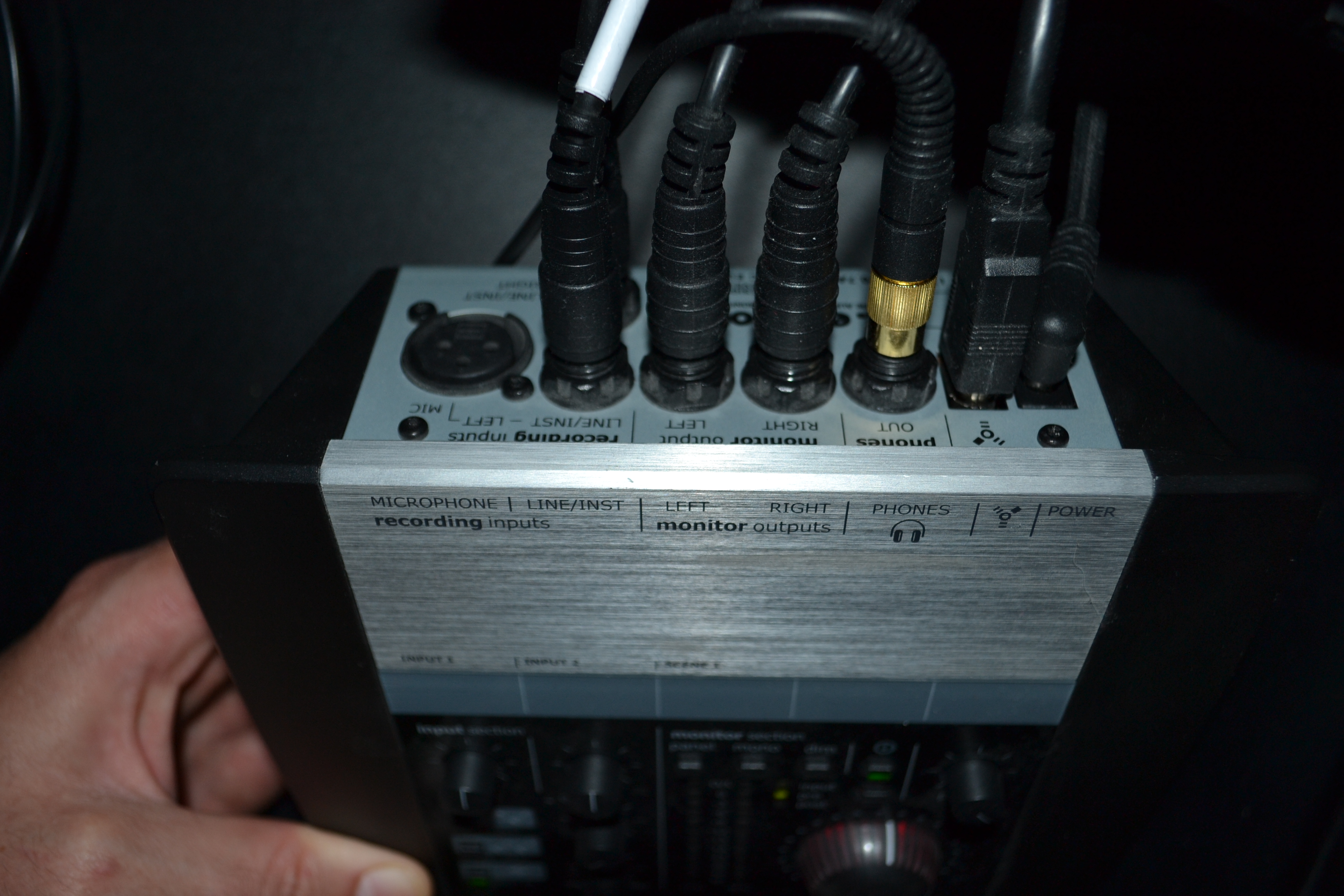